Follow all the action from Super Bowl LIV via beIN CONNECT

On one side of Hard Rock Stadium in Miami, the Kansas City Chiefs, who contested the first ever Super Bowl, losing to the Green Bay Packers in 1967, make their first Super Bowl appearance in exactly 50 years. It's a drought their rabid fan base deserves to see end. It should have ended last season, but an unlucky offside call on defensive end Dee Ford negated a game-winning interception in the AFC Championship, allowing the New England Patriots to stay alive and eventually win in overtime.

Two things have changed since that moment.  For one, Ford now plays for the Cheifs' opponents in Super Bowl LIV. The San Francisco 49ers will be looking to make history by tying the record for most Super Bowl titles by one franchise. Their 6th, which, coincidentally, would be in the same stadium as their 3rd in 1988 and 5th in 1995, would equal the Steelers' and the Patriots' title tallies. The Patriots, of course, are the second thing that's changed.

Although it's been coming for a few years, we may have finally seen the end of the Tom Brady - Bill Belichick era of New England dominance. Fitting, then, that the NFL is also witnessing the emergence of the next once-in-a-generation quarterback-coach duo. Andy Reid has been a successful head coach in the NFL for two decades, winning more than 60% of his games. The 61-year-old's 221 total wins with the Philadelphia Eagles and the Chiefs is the 6th most ever, and, most poignantly, the most of any NFL head coach without a championship. It's partly why many neutral fans are backing the Chiefs.

But a bigger reason for this support is the player that might finally take Reid to the promised land, Patrick Mahomes. 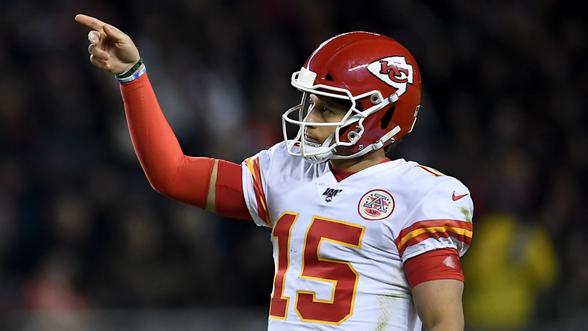 The 24-year-old, third year quarterback is being described by some as the most talented player the NFL has ever seen. A win in Miami would make him the second-youngest quarterback ever to win a Super Bowl, as well as the youngest to possess a title and a league MVP award. The latter honour was handed to Mahomes last year after he became only the second quarterback ever to throw 50 touchdown passes and over 5,000 passing yards in a single regular season. If it weren't for injuries this season, he could have put up similar numbers. And where it counts most, in the playoffs, Mahomes has been stellar. His 11 passing touchdowns, 2 rushing touchdowns, and 1,188 passing yards in four postseason games has earned him a Super Bowl appearance, and, if not for Ford, he could easily have been two for two.

Anyone who watches an in-form Mahomes in action will see where the numbers come from. He's not the only NFL quarterback with a powerful and accurate arm, the only one who can run with the ball, or the only one can perform and get creative under pressure; it's when the Texas native needs to activate all three skills at the same time that he stands above the rest. If any quarterback were being chased by several defenders, all his plans for the play in disarray, then suddenly threw a sidearm bullet pass 30 yards right into the arms of a well-covered receiver in the end zone, it would be his highlight of the season. For Mahomes, it's any given Sunday.

Add Reid's experience as well as Mahomes' world class group of receivers, including speedster Tyreek Hill and reliable tight end Travis Kelce, and you get a Chiefs offense that's nearly impossible to stop. No team has, in fact, since Mahomes returned to full fitness in mid-November. In wins over the Texans in the Divisional Playoffs and the Titans in the AFC Championship, Kansas City scored a total of 86 points. In both games, the Chiefs fell behind early, including a 24-point deficit to the Texans. But once Mahomes and company got going, it was lights out.

Those games also highlighted Kansas City's only weakness, their defense. It's a weakness their Super Bowl opponents are ready to exploit.

While they are one of the NFL's most successful franchises, the 49ers have just emerged from a dark chapter in their history. After four straight losing seasons, punctuated by the controversy surrounding former quarterback Colin Kaepernick, San Francisco have shot out of a cannon this season.

After years of adding quality pieces to their roster, the 49ers completed the puzzle by selecting elecrifying defensive end Nick Bosa second overall in last year's draft. In his third season, Head Coach Kyle Shanahan used those pieces and found the winning formula, leading San Francisco to a 13-3 record, and comfortable playoff wins over the Minnesota Vikings and Green Bay Packers. Quarterback Jimmy Garoppolo, cornerback Richard Sherman, running back Raheem Mostert, tight end George Kittle, and receiver Emmanuel Sanders are just a few names in a long list of those who have delivered for the Red and Gold.

Therein lies the Niners strength. They are a complete team with no weaknesses and the league's best defense. While they don't possess an offensive star like Mahomes, as the old saying goes, defense wins championships.

Should that saying continue to prove true, San Francisco would become just the second club in NFL history to win a Super Bowl after finishing the previous season with four or fewer wins, joining the 1999 St. Louis Rams. The 49ers would also improve to 6-1 in Super Bowls.

Shanahan and his father Mike would become the first father and son head coaches to win Super Bowls, with the elder winning Super Bowls XXXII and XXXIII as head coach of the Denver Broncos. This would also be a redemption story for the younger Shanahan, as his first super bowl experience didn't go as planned. The 40 year old was the offensive coordinator of the Falcons in Super Bowl LI, when Atlanta blew a 25 point third quarter lead in an eventual overtime loss to the Patriots.

In a sense, both the Chiefs and 49ers can learn from losses to the Patriots, in hopes of replacing New England as the NFL's next dynasty.