Djalma cancelled out Youssef Msakni's penalty as Angola secured a 1-1 draw with Tunisia in Group E of the Africa Cup of Nations.

Monday's clash in Suez saw few clear chances created by either side, with Tunisia captain Msakni seemingly having stepped up to seal all three points for his team.

Naim Sliti was brought down in the box late in the first half and Msakni made no mistake with the resulting spot-kick, but Angola hit back and claimed a deserved point when Djalma slotted home.

Angola had the better of the opening 45 minutes but Tunisia took the lead in the 34th minute.

A sweeping counter-attack led to Sliti cutting inside Paizo and shaping to shoot, with the defender's desperate lunge bringing him down, leaving Msakni to convert from 12 yards.

Gelson Dala fired off target as Angola continued to press, but Srdjan Vasiljevic's team appeared unable to find a way to break Tunisia down.

Msakni had a penalty appeal rejected in the 71st minute when referee Bamlak Tessema Weyesa adjudged the striker to have gone down too easily in the area.

But Tunisia have kept just one clean sheet in their last 17 Africa Cup of Nations matches and Angola levelled with their next attack.

Goalkeeper Farouk Ben Mustapha made an error in pushing Mateus' shot back into the danger zone, leaving Djalma to pounce from close range.

Tunisia had late chances to retake the lead but, after finding space in the box with some neat footwork, Wahbi Khazri curled his low shot wide, then Msakni drilled straight at Tony Cabaca in added time.

Goal! Angola levels the scores! Farouk Ben Mustapha pushes the ball into the path of Djalma who makes no mistake from close range! 1-1!

Msakni penalty is the difference at half-time! Can Tunisia hold on? Or will Angola get something from the contest? Join us for the second half in 15 minutes or so!

Penalty! Naïm Sliti is bundled down in the box! Youssef Msakni steps up and smashes the ball into the middle of the net! Tunisia take the lead!

Peep! We are underway at the Suez stadium

Now for Angola, a trusty 4-4-2 is being applied by Serbian boss Srdjan Vasiljevic. Lazio defender Bastos starts at the back, and could be in for a busy evening! 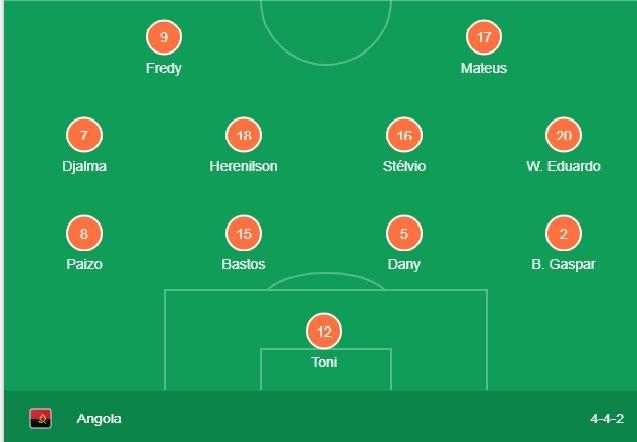 Team news time! First up Tunisia! Dangerman Wahbi Khazri starts, fresh from an impressive season in France. Keep an eye out for Yusef Msakni, the playmaker missed out on the 2018 World Cup with an ACL injury and will be looking to make amends for his side!

A quick look into the Tunisia dressing room ahead of the game!

Name a better view than a ready dressing room👕🇹🇳...
Did you spot your favourite Jersey?😍🧐#TotalAFCON2019 pic.twitter.com/HEqQzbZaD1

Tunisia warming up yesterday ahead of the game! Expectations will be high back home that Alain Giresse can bring back the Cup of Nations trophy back to Tunis!

So here we go! Angola has arrived and look relaxed ahead of their game! A quick reminder we will kick off at 20:00 Mecca

Good evening! Welcome to the Live Updates of Tunisia VS Angola from the Cup of Nations. Tunisia, who are the second highest ranked African side in the tournament will be targeting an opening game victory when they face off against Angola. As ever, join me for all the team news, build up and goals as they go in!