Carlos Sanchez was shown the second-fastest red card in World Cup history as Colombia slipped to a 2-1 defeat in their World Cup opener against Japan in Mordovia.

The Group H favourites suffered a nightmarish start to their campaign when Sanchez blocked Shinji Kagawa's shot with his arm after just two minutes and 56 seconds, prompting the referee to brandish the first straight red card for handball at a World Cup since Luis Suarez was sent off against Ghana in 2010.

Kagawa then put Japan ahead from the penalty spot but even with 10 men Jose Pekerman was able to make his side competitive and Juan Quintero levelled with a free-kick six minutes before half-time.

Pekerman brought on 2014 World Cup Golden Boot winner James Rodriguez in the second half but the Bayern Munich star, not fully recovered from a calf injury, was not allowed much of the ball by a disciplined, energetic Japan side.

Akira Nishino's men came into the tournament as one of the lowest ranked teams but they defied their position by making good use of their man advantage and fully deserved to have their lead restored when FC Koln forward Yuya Osako headed the winner in the 73rd minute.

Victory over Colombia will give Japan hope of progressing beyond the group stage for the first time since 2010, while Pekerman will hope that James can return to full fitness in time for their forthcoming clash with Poland.

The game was less than three minutes old when Sanchez blocked Kagawa's 20-yard shot with his arm and the referee pointed to the penalty spot before showing the midfielder a straight red card.

After lengthy protests, Sanchez eventually left the field and Kagawa was allowed to slot the penalty clinically into the bottom right corner of the net and Colombia's game plan was in tatters.

Despite the double setback, the South Americans attacked and Radamel Falcao got a toe to Juan Quintero's looping pass into the penalty area but could only poke the ball into the arms of veteran Japan goalkeeper Eiji Kawashima.

Falcao won a dubious free-kick after a challenge with Makoto Hasebe and Quintero's ensuing free-kick was driven low into the bottom left corner of the net where Kawashima arrived just too late to stop it from crossing the line.

After a frantic first half, the game slowed in the second but Osako burst into the Colombia box and drew a save from David Ospina with a tricky close-range shot that the Arsenal goalkeeper parried away.

Ospina was called into action again moments later, diving full length to his left to push Takashi Inui's curling 20-yard shot away from danger, before Pekerman sent on James as he sought a way to turn the tide back in favour of his side.

But Japan were dominating possession and their pressure told when substitute Keisuke Honda's corner found Osako, who outjumped his marker and headed the ball into the far corner of the net, beyond Ospina's reach.

James had a sight of goal with 13 minutes remaining but his first-time shot from inside the penalty area was turned over the crossbar by the outstretched leg of Osako, and he will hope to regain full fitness in time to inspire Colombia to better results against Poland and Senegal.

Osako puts the Samurai Blue into the lead

Colombia hit back! Quintero with the goal just before Half-time!

Goal! Japan take an early lead from the penalty spot! Kagawa slots it away!

Team News! The team sheets are in! Falcao captain's Colombia in his first World Cup appearance. Also no James Rodrigez for the South American side. As for Japan, Shinji Kagawa starts as the number 10. Will the Borussia Dortmund player help the Samurai blue to all three points?

Hello! Welcome to the Live Updates for Colombia Vs Japan. Can the 2014 quarter-finalist kick-start their Group H campaign with a win? We will have all the latest updates and Video highlights from the game so don't go anywhere!

Colombia will be looking to kick-start their Group H campaign with a victory over a Japan side who have made it to their sixth consecutive World Cup finals. You can watch Live & Exclusive streaming of the match from the Mordivia Arena via beIN SPORTS CONNECT.

Los Cafeteros impressed at the 2010 competition, reaching the quarterfinals whilst playmaker James Rodríguez picked up the golden boot in the tournament. Providing they can make a strong start, Colombia can realistically target another quarter-final, thanks in part to their kind draw.

In Jose Perkerman, Colombia has an experienced tactician who is no stranger to managing at the World Cup having let his native Argentina in 2010 and Colombia to their best ever finish in 2014. For the majority of the side, this could be their final World Cup appearance and will be looking to go out on a high.

Radamel Falcao is set to lead his side out against Japan on Tuesday afternoon, in what will be his first World Cup game at the age of 32. The Monaco striker missed out on the 2014 competition with a knee injury and will be relishing the opportunity to represent Colombia on the world stage. 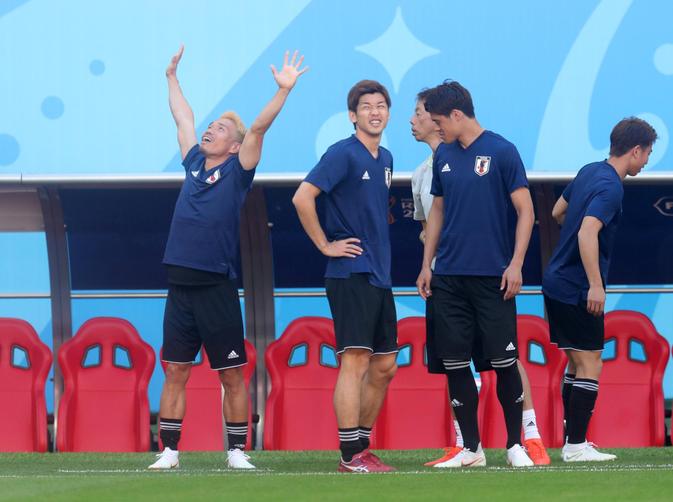 Japan’s preparations for the 2018 World Cup has been slightly hampered by the appointment of Akira Nishino just two months before the start of the tournament. Up until now, the gamble of replacing Vahid Halilhodžić the coach who guided the Samari Blue through the qualification stages hasn’t looked to have paid off with Japan losing preparation matches to Ghana & Switzerland prior to their Group H opener.

Borussia Dortmund playmaker Shinji Kagawa is likely to start against Colombia and will be the creative hub of the side. The 29-year old was a key player in Japan’s qualification run scoring six goals and will have to be at his best against the South Americans if Japan has a chance of getting out of Group H.

It promises to be an interesting match as Colombia opening up their World Cup campaign with a matchup against Japan. You can watch Live & Exclusive streaming of the match at the Mordivia Arena via beIN SPORTS CONNECT.