You can watch the stream of the match from the Rostov-On-Don Live & Exclusive on beIN SPORTS CONNECT.

Luis Suarez booked Uruguay's place in the World Cup knockout rounds, marking his 100th international appearance with the only goal in a 1-0 victory over Saudi Arabia.

Uruguay's result also means hosts Russia, who have won their opening two Group A matches, are through to the next phase with one fixture to spare, while Egypt and Saudi Arabia are both out of the tournament.

Saudi Arabia gave a far better performance than they produced in their 5-0 loss to the hosts but a poor mistake from replacement goalkeeper Mohammed Al Owais handed the South Americans the winner in Rostov-on-Don on Wednesday.

A corner from the left taken by Carlos Sanchez was missed by the keeper, with Suarez on hand to knock home and become the first Uruguay player to score at three World Cups.

With Juan Antonio Pizzi's men unable to create a clear chance, Saudi Arabia are without a win in 12 World Cup matches and in danger of finishing bottom of their group, as they have in all three previous appearances.

Russia and Uruguay, though, can look forward to a likely second-round meeting against either Portugal or Spain, depending on the outcome of Group B's remaining contests.

Saudi Arabia initially showed far greater defensive resilience following their hammering at the hands of Russia, only for Al Owais - who replaced Abdullah Al-Mayoof in the side - to gift Uruguay the opener in the 23rd minute.

A left-wing Sanchez corner was completely missed by Al Owais, giving Suarez a simple close-range finish into an unguarded net.

Fernando Muslera had to tip over a long-range drive from Hattan Bahebri, who then missed a fine chance in the box, as Saudi Arabia responded well to falling behind.

The flat feel of the game continued after the interval with both sides struggling to build tempo in hot conditions at the Rostov Arena.

Sanchez and Suarez wasted half-chances to extend the lead for Uruguay, who also won their opener against Egypt 1-0 thanks to a set-piece goal, defender Jose Gimenez heading home a late winner.

Saudi Arabia have conceded 14 headed goals at the World Cup and it could have been 15, Martin Caceres heading over in the 68th minute from another Sanchez delivery.

Sterner tests await Uruguay and Russia in the last 16, though, with Group A's qualified nations set to face off on Monday in Samara to decide who secures top spot.

Goal! Luis Suarez with a tap-in from the corner! Uruguay take the lead! Side note, Suarez is playing in his 100th game for his country!

Our man on the scene Tancredi Palmeri gives us the rundown of the sides! Not long till kick-off!

Team News! We have the team news! Carlos Sanchez & Cristian Rodriguez are the two changes for Uruguay, they should start on the wings. As for Saudi, four changes after the 5-0 hammering by Russia. Mohammed Al Owais comes in as keeper. Elsewhere, Ali Albulayhi is drafted into the back four, while Hatan Bahbri moves into midfield and Fahad Almuwallad (he was on loan at Levante) leads the line.

Hello! Welcome to the Live Updates for Uruguay Vs Saudi Arabia. La Celeste can book their place in the round of 16 with a victory over Saudi Arabia in Rostov. Whilst for Saudi Arabia, they will be looking to getting a positive result against Uruguay and will need at least a point to stay at the World Cup.

Uruguay will be confident of booking their place in the round of 16 when they face off against Saudi Arabia at the Rostov Arena. La Celeste needed a stoppage-time goal from José Giménez to defeat Egypt and will be confident of finding the back of the net against a Saudi defence who hardly covered themselves in glory in their 5-0 defeat to hosts Russia.

Uruguay looked compact and composed in their opening game against Egypt, and will be quietly confident of picking up the second win of the tournament. Óscar Tabárez is likely to keep with the same side that beat the Pharaohs, with both Luis Suarez and Edison Cavani likely to start up front in a 4-4-2.

The duo showed glimpses of their quality against Egypt, both players will be targeting to open their World Cup account against a Saudi side who looked completely out of their depth in their opener. 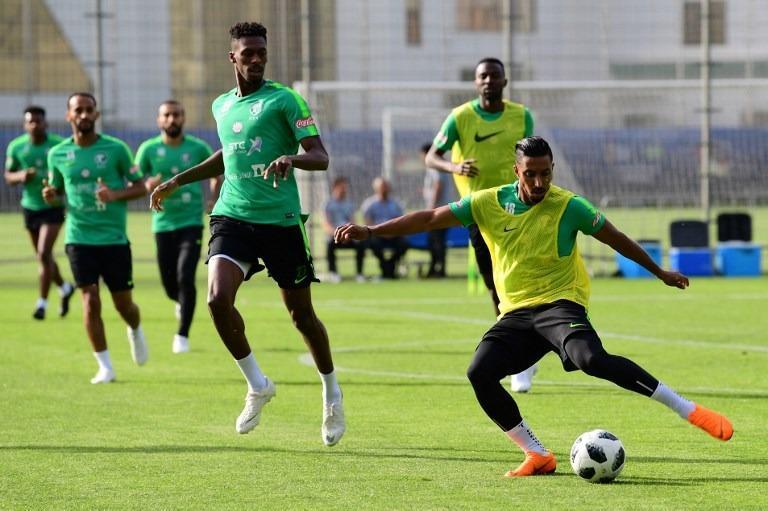 As for Saudi Arabia, they really need to rally and show some spirit against Uruguay, if the green falcons are to come away from the tournament with any sort of pride. Much has been made back home about the shambolic defeat to a poor Russia side, however, Juan Antonio Pizzi now has to prove his worth and raise the morale of the side.

Simply put, Saudi must improve defensively especially at set-pieces. Russia scored two headers in their 5-0 opening day win, and Pizzi must have addressed these shortcomings in the last six days.

Saudi’s buildup was somewhat overshadowed by a fire breaking out on their plane on route to Rostov for the game. Thankfully for everyone, the side landed safely and will now be eager to get on with the game on Wednesday evening.

Fahad Al-Muwallad showed glimpses of quality in his substitute cameo against Russia. The winger enjoyed a brief stint in La Liga with Levante during the second half of the season and could be given the nod against the La Celeste. His pace and drive towards the goal will be a key asset for the side, should Saudi Arabia come away with a positive result.

It promises to be an interesting tie as Uruguay look to book their place in the round of 16 when they take on a Saudi Arabia side with a point to prove. Watch the Live & Exclusive stream of the game on MAX HD3 & beIN SPORTS CONNECT.