You can watch the stream of Serbia Vs Brazil Live & Exclusive on beIN SPORTS CONNECT.

Brazil's win set up a last-16 meeting with Mexico in Samara on Monday, while it is Switzerland, not Serbia, who will take on Sweden in St Petersburg the following day after drawing 2-2 with Costa Rica.

Tite's side left it late to get past Costa Rica on Friday, but they only had to wait 36 minutes for the opener in Moscow, Paulinho stabbing over Vladimir Stojkovic off a magnificent pass from Philippe Coutinho.

It was Paulinho's eighth goal since Tite took the helm in 2016 and brought his former Corinthians star back into the set-up, with only Neymar and Gabriel Jesus (10) scoring more for Brazil in the same timeframe.

The Barcelona midfielder was replaced by the more defensive Fernandinho in the 66th minute as Serbia went on the attack in a bid to save their World Cup campaign.

But Silva, the former captain who was shunned following Brazil's failure to lift the World Cup on home soil four years ago, wrapped up the win and kept hopes of an unprecedented sixth title alive.

The Selecao started positively, but had to replace Marcelo with Filipe Luis, who only returned from a broken leg last month, in the 10th minute, the Real Madrid left-back grimacing as he hobbled down the tunnel with what was later confirmed to be a back spasm.

Jesus proved lively with runs in behind the Serbia defence and his endeavour created a chance for Neymar, whose cross-goal strike was pushed away by Stojkovic.

Manchester City striker Jesus was caught on the ankle by Sergej Milinkovic-Savic in the process, but it did not appear to hinder him when he cut inside of Milos Veljkovic and saw his shot blocked behind by Nikola Milenkovic.

Adem Ljajic earned a yellow card for a late challenge on Neymar, the Paris Saint-Germain star receiving more rough treatment, and Aleksandar Mitrovic missed the target with an acrobatic attempt in the 34th minute.

The breakthrough came two minutes later and it went the way of Brazil. Filip Kostic did not track the run of Paulinho, who raced between two defenders and poked Coutinho's delivery beyond the onrushing Stojkovic.

Neymar had a low drive kept out by Stojkovic at the near post after a swift break five minutes into the second period, and Serbia responded by turning up the pressure.

Antonio Rukavina, who started in place of the experienced Branislav Ivanovic, saw his shot pushed into the danger area by Alisson and the goalkeeper was relieved to see Silva stop Mitrovic nodding the loose ball home.

A speculative cross from Milinkovic-Savic had Alisson scrambling, while Mitrovic headed a cross from Rukavina straight at the feet of the keeper in the 65th minute.

Tite replaced Paulinho with Fernandinho as he sought greater stability, but it was Silva, capitalising on shoddy marking from Nemanja Matic, heading home at the near post from Neymar's left-wing corner two minutes later that truly gave him that.

The wind was taken out of Serbia's sails and Brazil confidently saw out the final stages, Stojkovic doing well to thwart Neymar in stoppage time as the Selecao avoided the humiliating group-stage exit that befell fellow heavyweights and defending champions Germany earlier in the day.

Serbia needs to pull off a big result against Brazil if the European side is to reach the round of sixteen for the first time as an independent nation. Despite losing 2-1 to Switzerland in the second group game, confidence will be high in Mladen Krstajić’s squad that they can get the job done against the Selecao.

The contest against Switzerland was full of controversy, not to mention the politically sensitive celebrations from players Granit Xhaka & Xherdan Shaqiri which has garnered fines from FIFA. Serbia will now have to put that all aside and concentrate on Brazil.

Aleksandar Mitrović scored his first goal of the World Cup against Switzerland, and the Fulham will be relishing the battle against Brazil. The tall striker is a real handful at set pieces, something Brazil struggled with when taking on Switzerland in their opening group game. Six players have bookings for Serbia but Krstajić is likely to go with a full-strength team heading into this crunch match. 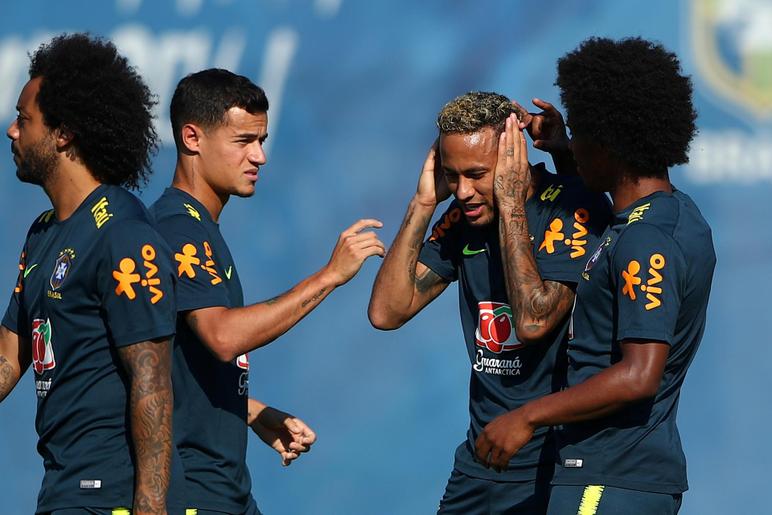 As for Brazil, they just need a draw to progress to the knockout stages. Tite’s side is now up and running at the World Cup after two stoppage-time goals from Philippe Coutinho and Neymar put a spirited Costa Rica side to the sword.

Neymar broke down in tears at the final whistle of the game, which the PSG man attributed to his joy at recovering from his broken metatarsal. After the tears, the playmaker must now deliver and score the goals to get the Selecao through to the knock out stages.

Tite will have one choice to make at right back and see if Man City man Danielo has recovered from his injury to replace Fagner in the side. After impressing in his cameo against Costa Rica, Liverpool attacker Roberto Firmino could also be pushing for a starting place.

It promises to be a fascinating encounter as Serbia take on Brazil.  Watch the Live & Exclusive stream of the game on MAX HD3 & beIN SPORTS CONNECT.