You can watch the stream of Saudi Arabia Vs Egypt Live & Exclusive on beIN SPORTS CONNECT.

Al Dawsari in stoppage time! Saudi have their first World Cup win since 1994!

Saudi Level from the penalty spot. Al Faraj with their first goal at the 2018 World Cup.

Lovely penalty save from Essam El-Hadary! It's one to tell the grandkids about.

Mo Salah! You Beauty! A deft chip to give Egypt the lead!

Team News! Essam El-Hadary makes history. The Veteran stopper gets the start! Mo Salah also starts in Volgograd! As for Saudi, Salem Al-Dawsari starts after looking good in the game against Uruguay.

And now, the teams for #KSAEGY!

It looks like a piece of #WorldCup history could be made in this one... ⚽️🙌 pic.twitter.com/SOypiUVKqk

Hello! Welcome to the Live Updates of Saudi Arabia Vs Egypt. Both sides cannot make it to the round of sixteen and will be playing for pride in their final World Cup game. Egypt is likely to hand a start to keeper Essam El-Hadary, who will be the oldest ever player to take part in a World Cup at 45-years old. As for Saudi Arabia, they will be looking to score their first goal of the tournament, after failing to find the back of the net in defeats to Russia and Uruguay.

Saudi Arabia will be targeting their first World Cup victory since 1994 when they face off against Egypt on Monday evening. After being humbled 5-0 in the opening match against Russia, the Green Falcons put in a much-improved performance in their second game but still ran out 1-0 losers against Uruguay.

Juan Antonio Pizzi’s team will now head into their final group A game and will be looking to avoid a clean sweep of defeats. Something that they have failed to do in all five of their previous visits to a World Cup. Whilst Saudi will also be looking to score their first goal of the competition.
Salem Al-Dawsari has been one of the better players in the Saudi squad and showed flashes of quality in the game against Uruguay. The 26-year old winger joined Villarreal in the January transfer window and will be hoping to show his quality on the world stage. 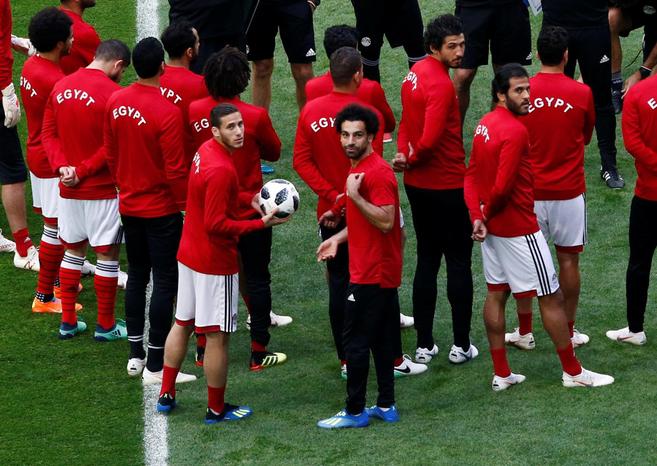 Egypt will be hoping to end their World Cup adventure on a high when they face Saudi Arabia in Volgograd. The Pharaohs cannot qualify for the round of 16, but will be looking to avoid finishing bottom of Group A, and will be hopeful of getting the victory over their fellow Arab side.

It’s been a disappointing World Cup campaign for the Pharaohs following a narrow 1-0 defeat to Uruguay and a 3-1 defeat at the hands of hosts Russia. Much has been made on the fitness of star man Mohamed Salah, who certainly was not at his best against Russia, despite scoring from the penalty spot.

In team news, Essam El-Hadary is likely to be called up at some point and will be hoping to get in the record books as the oldest player to play at a World Cup. The 45-year old goalkeeper was an unused substitute in the last two games, and Hector Cuper will have to decide if he will play the Al-Taawoun stopper.