Remeber you can watch the Live Stream of Portugal Vs Spain via beIN SPORTS CONNECT.

Spain led with three minutes to go after Nacho Fernandez hit a wonderful 25-yard drive but Ronaldo was determined to steal the headlines for himself.

And he ended the day with a World Cup match-ball after hitting an outrageous late free-kick to ensure the spoils were shared in this blockbuster clash in Sochi.

Captain Ronaldo had given Portugal a fourth-minute lead from the penalty spot after he was fouled by Madrid team-mate Nacho, restoring the lead thanks to David de Gea's horrible mistake.

Diego Costa replied twice to get the 2010 champions level, with Nacho's beautiful goal having seemingly settled a high-class encounter at the Fisht Stadium.

Ronaldo, though, had other ideas and stepped up to beat De Gea again with a perfect 20-yard free-kick, almost snatching all three points with a stoppage-time header.

Peep! All over in Sochi! 3-3 easily the best game of the World Cup so far. A real thriller! Match report to follow.

90+2 Ronaldo is down! I think he might have cramp!

87- GOAL! 3-3 IT JUST HAD TO BE! Cristiano Ronaldo bends the freekick into top right corner with plenty of Swaz. A hat-trick for Ronaldo. You can't keep him down! 3-3!

85- Lucas Vasquez is on! He replaces the magnificant David Silva (My personal man of the match) final change for Spain is done!

81- Spain playing keep ball. I would like to see the passing stats at the end of the game. They have bossed proceedings this evening.

79- Final sub for Portugal Gonçalo Guedes is replaced by Andre Silva. Who averages a goal every other game for the national side.

76- Sub for Spain. Diego Costa, who has been superb tonight is replaced by Iago Aspas (Rember him Liverpool fans)

75- A quick throw and Portugal are away. Quaresma has a shot with the outside of his boot which flies well over.

73- You feel that Spain could see this game out by keeping the ball, but Portugal are trying to press their opponents. I just fear that Ronaldo is running out of juice here (famous last words, I know)

71- Quaresma wins a corner. Moutinho knocks the ball to the back post, Ronaldo wins the header but Spain eventually get it away.

69- Subs ahoy! Ricardo Quaresma is on for Bernardo Silva. One change for Spain, Iniesta makes way and Thiago Alcántara comes on in his stead.

63- Seriously, that strike was too sweet! Portugal is about to make a change. João Mário who pitched up at West Ham this season is about to come on.

60- That was Nacho's first goal for his country! What a strike! One to tell the grandkids about...

57- Goal! WOW! A crisp strike from right-back Nacho gives Spain the lead! It's magical from the Real Madrid man! 3-2 to Spain! What a fightback from La Roja. 3-2 Spain!

54- GOAL! A simple free-kick leads to a leveller. Silva knocks the ball to Busquets at the back post who squares across the face of the goal, Diego Costa bundles the ball in from close range. 2-2! GAME ON!

53- Iniestia is floored by Moutinho. Free kick for Spain. David Silva stands over it some 40 yards out!

51- A sustained period of Spanish possession here. Just carefully passing the ball waiting for an opening. It's very enjoyable to watch, although I suspect if your a Spain fan you'll be wanting a goal soon...

49- Bruno Fernandes has a shot from distance which bounces harmlessly wide.

Peep- Cristiano Ronaldo gets the second half started in Sochi

45- Peep! Best half of the World Cup so far. Engrossing! A penalty from Ronaldo, Spain levelled up with a fine solo strike from Diego Costa. Before a David de Gea error has Portugal an undeserved 2-1 lead. We go again in 15 minutes.

43- Goal! Against the run of play, Portugal take the lead! Guedes passes the ball to Ronaldo who attempts a shot from outside the box. It should be a routine save but it slips through the hands of De Gea. It's a horrible error from the United keeper. 2-1 Portugal.

42- Isco, who has magic hair for the record attempts a shot, easily saved by  Rui Patrício.

41- Pepe rakes his studs down the ankle of Diego Costa, supringingly the defender doesnt get a yellow.

40- After a blistering start, Portugal has faded a tad. Need to get in at half time at 1-1 methinks.

38- Corner for Spain, Busquets gets his head on the ball it's out for a goal kick.

35- Close from Iniesta, more intricate build-up play see's the ball knocked to the former Barca star, his glancing shot skims inches wide! It could have been 2-1!

33- Spain has refound their mojo again, knocking the ball around for fun. Portugal is chasing shadows at the moment.

30- A much-needed lull in proceedings. Spain keeping the ball well in the last few minutes.

28- David Silva steps up on the free-kick. He smashes the ball into the wall.

27-Bruno Fernandes picks up a yellow for a nasty challenge on Nacho.

25- Spain could of has a second! Isco cracks a shot, which rebounds off the post and on the goal line. Play contines with Isco and his team mates hounding the referee. No goal!

23- Goal! 1-0! Or maybe not! It's our first VAR moment of the World Cup! Diego Costa beats three defenders and fires it into the bottom corner. Pepe looks like he was fouled in the build-up, but after a quick look at the video, the ref gives the goal! 1-1!

21- Portugal spring away on the counter, Ronaldo kindly passes the ball to Gonçalo Guedes who cant get his feet right.

20- Iniesta scampers to the byline, passes the ball to David Silva who can't quite get the shot away! Signs of life from Spain

17- Sergio Busquets is the first yellow card of the evening. That was a nasty kick on Gonçalo Guedes. Ronaldo smashes the free-kick against the wall.

15- Slowly, Spain is keeping the ball a little better. Portugal spring forward on the break, Gonçalo Guedes cracks a shot which is cleared by Sergio Ramos

13- Portugal seems happy to be playing keep ball, trying to frustrate the Spanish. Understandably, Ronaldo is bossing his team-mates out on the pitch.

11- Side note Ronaldo has now scored at his fourth World Cup. That is quite good.

9- First chance of note for Spain, Costa lays the ball off to David Silva in the box, the Man City midfielders shot flies well over.

6- Spain looks shell-shocked here. Portugal has been the better side in the early exchanges here.

2-Penalty! Ronaldo takes a tumble under the challenge from Nacho! The referee points to the spot! Early drama in Sochi!

1- Ronaldo being Ronaldo with a double stepover. Nothing to see here people!

Peep! Spain, all in white get the party started!

Right! The teams our marching out! If you want to watch the game live, jump onto beIN SPORTS CONNECT otherwise you are stuck with me and my Live Updates (With video highlights)

Ten minutes away from game time! I'm excited, I just hope this game delivers! Hard to call this one, I'm going with a meaty 2-2 draw!

Always good to have a man on the scene! Tonight it's Aaron Summers who has given us the rundown on Spain heading into the big match in Sochi.

We have team news! Nacho is in at right back for Dani Carvajal. The lovable scamp that is Diego Costa is leading the line for Spain. As for Portugal, Ronaldo, as you would expect, is handed the captain's armband whilst in central defence Fonte and Pepe are paired up in what seems like the slowest pairing of centre backs in the history of football.

Hello! Welcome to the Live Updates for the final game of day 2 of the World Cup! It's a tasty one in prospect as Portugal take on next door neighbours Spain. As I'm sure you are aware, Spain sacked Julen Lopetegui just 24 hours before the start of the tournament. La Roja officials are claiming it's business as usual but the player's preparation must have been jilted since the shock news broke. Anyway, Fernando Hierro has stepped into the breach for his county and will be hoping for a win. Team news is coming up in one hot minute!

2016 European Champions Portugal start their World Cup campaign with an Iberian derby against rivals Spain, who have just sacked manager Julen Lopetegui twenty-four hours before the start of the World Cup. The game is taking place at the Fisht Stadium in Sochi. As ever you can watch the Stream of the match Live & Exclusive on beIN SPORTS CONNECT.

Portugal shocked many on route to claiming the 2016 European Championships in France, and will again be dark horses to go all the way again in Russia to lift their first ever World Cup. Head coach Fernando Santos guided his country through yet another successful qualification campaign, which saw Portugal lose once during the whole campaign.

Understandably much of the focus will be on Cristiano Ronaldo to deliver for his national side. Ronaldo, who is Portugal’s all-time leading goal scorer will be charged with scoring and creating the goals to push his country deep in the competition. After picking up yet another Champions League title with Real Madrid, Ronaldo who at the ripe old age of 33 is as hungry as ever to add yet another trophy to his personal honours list. 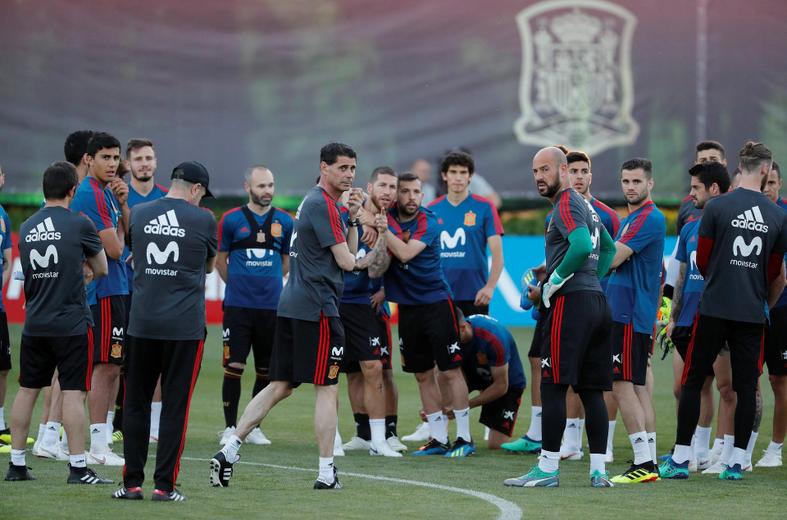 As for Spain, their World Cup preparations were thrown into disarray when head coach  Julen Lopetegui was relieved of his duties of managing the side just two days before their opener against Portugal. The timing of Real Madrid confirming that Lopetegui was to manage Los Blancos after the World Cup, was not ideal for the Spanish FA who was left with little choice than to fire the 51-year old coach.

Spain moved quickly to replace Lopetegui with sporting director Fernando Hierro. The former Real Madrid defender only has one year of experience managing  Oviedo, and the 50-year old coach will be hoping his experienced side will be able to band together for their group B opener.

Keeper David de Gea could be the key man for the La Roja heading into this Iberian showdown in Sochi. The Manchester United stopper has had yet another impressive club season and will be expected to be tested against a Portuguese side who like to play quickly on the break. Thankfully the keeper, who has been linked with Real Madrid in the past has some of the best reactions in world football and will be more than ready for the challenge from the Portuguese.

It promises to be an interesting match as  Portugal take on a Spain side who have had their fair share of problems heading into the tournament in their opening game of Group B. You can watch all the action Live & Exclusive on MAX HD3 & beIN SPORTS CONNECT.