Top seed Sabalenka – appearing in Moscow for the first time – had not played since being downed by Leylah Fernandez, having tested positive for coronavirus on the eve of the Indian Wells Open.

The Belarusian, who sits second in the world rankings, profited from a bye in the first round before battling past Tomljanovic 7-6 (7-2) 4-6 6-1 on Wednesday as she fired 10 aces but made 30 unforced errors.

Number two seed Garbine Muguruza also reached her seventh quarter-final of the season as she defeated Tereza Martincova 6-4 4-6 6-3 in just under three hours in Moscow.

Meanwhile, Elina Svitolina was shocked in the Tenerife Open as she was dumped out by Maria Camila Osorio Serrano, who succeeded 5-7 6-3 6-2 to claim her first top-10 victory.

Svitolina was the favourite in Spain and comfortably took the first set on Tuesday. However, inadequate light stopped play and the 19-year-old Osorio responded emphatically the following day to secure a memorable triumph.

Ann Li coasted past Varvara Gracheva 6-4 6-2 after Anna Karolina Schmiedlova had dispatched Jaqueline Cristian 6-2 7-5 in the opening match of the day.

Xinyu Wang retired injured against Alize Cornet, who led 4-1 in the decisive set, while Donna Vekic and Irina-Camelia Begu's match was suspended for bad light with the Croatian leading by a set. 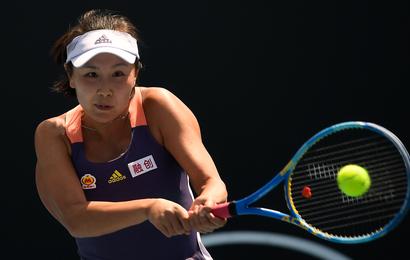