Peng had been widely considered to have been missing since making sexual assault allegations against Zhang Gaoli, the ex-vice premier and member of the Chinese Communist Party's Politburo Standing Committee, more than three weeks ago.

Despite footage released by Chinese state-run media on Saturday purporting to show Peng in a restaurant with friends, followed by images of the 35-year-old at a youth tournament on Sunday, concerns have been raised regarding her safety.

However, with the likes of Serena Williams, Naomi Osaka and Novak Djokovic calling for answers on Peng's whereabouts, the former world number 14 has now spoken publicly for the first time since November 2.

In a statement released on Sunday, the IOC said Peng had spoken to president Bach for 30 minutes.

The announcement said: "She explained that she is safe and well, living at her home in Beijing, but would like to have her privacy respected at this time.

"That is why she prefers to spend her time with friends and family right now. Nevertheless, she will continue to be involved in tennis, the sport she loves so much."

The statement included an image of the video call between Bach and Peng, who was smiling to the camera.

IOC member Li Lingwei and IOC Athletes Commission chair Emma Terho were also on the call, with the latter adding: "I was relieved to see that Peng Shuai was doing fine, which was our main concern.

"She appeared to be relaxed. I offered her our support and to stay in touch at any time of her convenience, which she obviously appreciated."

Prior to Sunday's latest development, the Women's Tennis Association (WTA) called for more information about Peng.

"I am glad to see the videos released by China state-run media that appear to show Peng Shuai at a restaurant in Beijing," said WTA chairman and chief executive officer Steve Simon in response to the restaurant footage.

"While it is positive to see her, it remains unclear if she is free and able to make decisions and take actions on her own, without coercion or external interference.

"This video alone is insufficient. As I have stated from the beginning, I remain concerned about Peng Shuai's health and safety and that the allegation of sexual assault is being censored and swept under the rug.

"I have been clear about what needs to happen and our relationship with China is at a crossroads."

Next Peng Shuai video 'does not alleviate' WTA concerns
Read 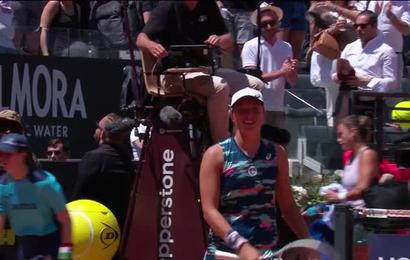