The Poland international improved his season goal tally to 53 in all competitions as he scored twice and assisted another two in a 4-1 victory at Allianz Arena that saw Bayern advance from the Round of 16 as a 7-1 aggregate winner over Chelsea.

Lewandowski now has 13 goals in seven UEFA Champions League appearances this term, four behind the record Cristiano Ronaldo set for a single season in 2013-2014.

But the prolific 31-year-old striker insisted he is more interested in helping his side progress from next Saturday's (AEST) single-leg quarter-final in Lisbon, where Barca awaits after its 4-2 aggregate win over Napoli.

"It's not a target for me," Lewandowski said when asked about Ronaldo's record. "We have another knockout game to come and have to play really well as a team.

"The most important thing is to play well and reach the next round. We have to show as a team we are better [than Barcelona] in order to reach the semi-finals.

"Barcelona is always dangerous and plays great football. We have to be at it from the first minute and show our quality. The better team will play in the next round."

Lewandowski played a direct part in every goal for Bayern in its victory over Chelsea, having also scored one and set up a couple for Serge Gnabry in February's first leg at Stamford Bridge.

Head coach Hansi Flick was keen to praise his whole side and not just in-form Lewandowski, who has netted more times in 2019-2020 than any other player in Europe's top five leagues.

"He scored twice, so it goes without saying what he can do," the Bayern boss said. "This is what makes us stand out as a team.

"I was very satisfied with the 90 minutes from everyone. We wanted to win the game and pick up from where we left off.

"Chelsea have an exciting team and an incredible amount of speed. It would have been our fault if we let them into the game, but the first 30 minutes from us were great."

The only sour note for Bayern was the sight of Jerome Boateng hobbling off with an apparent knee injury in the second half, but Flick was hopeful the centre-back would be fit for next week's huge showdown with Barca.

"I don't think it is so bad for Jerome," he said. "That's the information I got from the medical staff. [Benjamin] Pavard is also trying everything to be ready.

"We will prepare for that game like any other. We want to show our strengths again and must be 100 per cent focused, not just on Lionel Messi but every player." 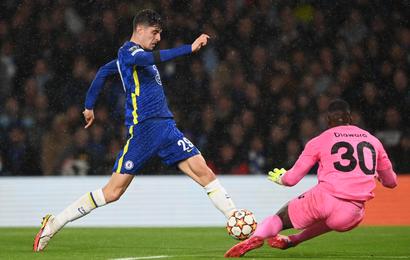