Madrid had to withstand a barrage of pressure in the first half, with Thibaut Courtois doing well to deny Edin Dzeko and Lautaro Martinez in the Champions League Group D encounter.

Rodrygo replaced Lucas Vazquez in the 65th minute with Los Blancos getting more of a foothold in the game and the Brazilian popped up with a late winner in a 1-0 success.

Asked why Hazard, who played 66 minutes in the 5-2 LaLiga win against Celta Vigo at the weekend, did not feature in Milan, Ancelotti said: "I thought about putting him on in the second half, but Inter closed the centre of the pitch well.

"I wanted to open up the game from the wings, which is why I put Rodrygo on."

Rodrygo is yet to start a game under Ancelotti, but he has now scored in two of his three Champions League appearances against Inter - both of his strikes representing a winning goal,

Ancelotti has attempted to stop the 20-year-old worrying about the number of minutes he gets and instead get him focused on performing at the highest level when he is selected.

"I told him it's not important how many minutes he plays, but how he plays them," Ancelotti told Movistar+.

"He helped [Dani] Carvajal a lot and then in front of goal he is very cool and scores goals.

"With his introduction we played more on the wing and found the solution. I liked the game because he had to suffer and be compact. The team not only has quality, but it also has commitment."

Rodrygo said: "Of course, I always want to play. When I'm on the pitch, I can do something for the team.

"I want to play, but I respect the coach's decisions and I'm going to work hard to be able to be there. At Real Madrid it's always difficult."

Next BVB boss Rose in awe of 'extraordinary' Bellingham
Read 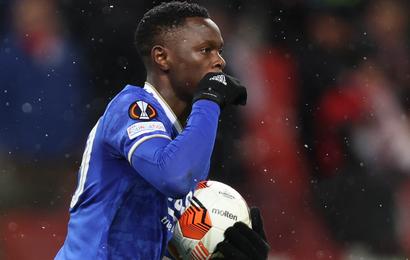