Nick Kyrgios said he wanted to hit Rafael Nadal "square in the chest" after crushing a forehand into the Spaniard during his Wimbledon loss.

But the Spanish 18-time grand slam champion appeared to be annoyed when Kyrgios blasted a forehand into him from behind the baseline in the third set, winning the point and opting not to apologise.

Kyrgios, 24, stood by his decision not to apologise to Nadal for the incident.

"Why would I apologise? I mean, the dude has got how many slams? How much money in the bank account?" the Australian said. "I think he can take a ball to the chest, bro. I'm not going to apologise to him at all."

Asked if he aimed at Nadal, Kyrgios responded: "Yeah, I was going for him. Yeah, I wanted to hit him square in the chest. Like, he's got decent hands."

Nadal, who will face Jo-Wilfried Tsonga in the third round, accused Kyrgios of playing dangerously by hitting the blistering forehand.

"Honestly, it's not about what I feel or what I don't feel. Honestly, it's about we are in a game that the history of this sport is about respect and is about playing fair during the whole time," he said.

"I know he's a big talented player, but I am a professional player, too. I know when you hit this kind of ball, the ball can go anywhere. This time the ball went in, almost hit me, no problem. I am professional, so I know how to avoid this.

"But another one, the ball goes straight to the back. So [it could] have been a dangerous moment for the line umpire. That ball hits an eye or something like this, it's a problem. That's it.

"It's not about I am angry about him at all. It's about I want to play a match of tennis. Sometimes it's difficult."

Next Barty darts through at Wimbledon
Read 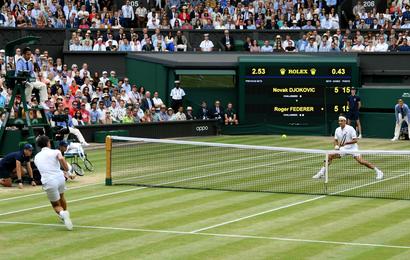