Antonio Conte's side are still red-hot favourites to win a first league title since the 2009-2010 season, though the gap to neighbours Milan is down to nine points with seven games remaining after its city rival overcame Genoa earlier on Sunday.

Inter hit the woodwork twice in the first half, yet it went in at the interval behind after Handanovic had fumbled a cross into his own net.

Christian Eriksen gave Inter hope of securing consecutive away league wins over Napoli for the first time since 1997, but Gennaro Gattuso's hosts held firm to move within two points of fourth-placed Juventus.

After a tepid start, Inter went agonisingly close to going ahead shortly before the half-hour mark when Romelu Lukaku diverted Marcelo Brozovic's strike onto the crossbar from six yards.

Napoli then broke the deadlock nine minutes before the interval after some slapstick goalkeeping from Handanovic.

Lorenzo Insigne's cross should have been comfortably dealt with by the Inter keeper, yet the ball conspired to end up in the back of the net after he collided with Stefan de Vrij when trying to claim it.

Lukaku hit the woodwork again before the interval, steering Eriksen's free-kick onto Alex Meret's right-hand post, as Inter finished the first half strongly.

Inter deservedly pulled level 10 minutes into the second half when Eriksen rifled in just his second Serie A goal for the club from 20 yards.

Matteo Politano struck the crossbar with a thunderous strike late on, while Inter had a nervous wait when referee Daniele Doveri reviewed a De Vrij tackle in the penalty area on the pitchside monitor, the official ultimately deciding the Dutchman had legally won the ball. 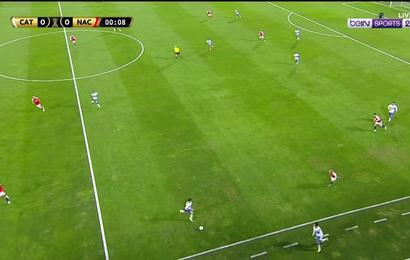