Both England and Ireland head into their second Pool A match in the Autumn Nations Cup on the back of resounding wins, with Jones' men overwhelming Georgia 40-0 and Ireland hammering Wales 32-9.

Whichever side wins will be well placed to contest the showpiece match against the Pool B winners come next month's finals weekend.

"Ireland were very happy with their dominant performance against Wales," Jones said Thursday of an Irish team whose head coach, Andy Farrell, is the father of England captain Owen.

"As their coaching staff said, they were dominant, so the challenge is can they bring a dominant Irish performance to Twickenham?"

Six Nations champions England have won their last three games against Ireland, including an impressive 24-12 victory in February.

But Jones said of Sunday's (AEDT) fixture: "It's a huge step up from what we've been encountering in the last couple of games."

The Autumn Nations Cup came into being after the traditional southern hemisphere giant -- South Africa, New Zealand and Australia -- scrapped their end-of-year tours of Europe because of the coronavirus outbreak.

"I think it's fantastic," said veteran Australian coach Jones of the new tournament.

"It's a different format, every game counts because it puts you in a situation where you're playing on the last weekend in the main game or in the Under-10s kick-off time, so you want to be in the main game and that's where we're aiming to be."

He said: "We're enjoying the format greatly. Whether this takes the place of the southern hemisphere teams coming, I think no one knows where we are going to be in 12 months' time, so we'll see."

Sunday's match will again be behind closed doors but former Australia and Japan boss Jones said England, last year's losing World Cup finalists, were just thankful for the chance of playing at all amid the pandemic.

"We're grateful for the opportunity to play top-level rugby, the highest level of rugby in an environment when things are so difficult," he said.

"I was talking to one of our players and in his family three people have lost their jobs. It's a difficult time, so for us to have the opportunity to play rugby is absolutely fantastic.

"We'd like to have crowds and that would be the number one target, but paying games without crowds is the normal at the moment and we're enjoying the normal." 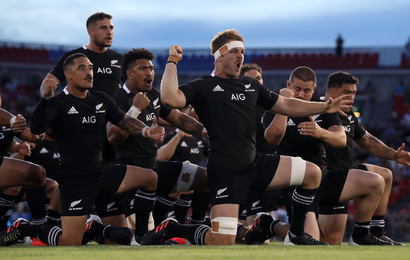