Unai Emery's side has struggled for form on its travels in all competitions but were gifted three points at Vicarage Road on Monday, moving them up to fourth in the table.

Foster's lapse in concentration saw Pierre-Emerick Aubameyang score his 18th league goal of the campaign in farcical fashion in the 11th minute, with Deeney then almost immediately dismissed for an elbow on Lucas Torreira.

FA Cup finalist Watford impressed despite being reduced to 10 men, full-back Adam Masina clipping the crossbar with a superb drive in the second half, but it succumbed to its first home defeat of the year.

Watford made the better start only to fall behind in self-inflicted circumstances.

Daryl Janmaat played a routine pass back to Foster but the Watford goalkeeper did not spot the advancing Aubameyang and his clearance crashed against the striker and into the net.

Within two minutes Watford were down to 10, Deeney sent off for catching Torreira, although Bernd Leno soon tipped Craig Cathcart's drive on to the post.

The Hornets continued to test Leno despite Arsenal's man advantage, with Etienne Capoue's floated free-kick turned away by the keeper.

Foster made a fine block to deny Henrikh Mkhitaryan after the restart, the Armenia international seeming certain to turn home Alex Iwobi's cross with Watford caught short at the back.

Masina went closest to earning the host what would have been a deserved draw, the defender letting fly with a rising drive that nicked the woodwork.

Arsenal failed to kill the game, Aubameyang missing a chance for his second, but they held on thanks to Ainsley Maitland-Niles' excellent block on Andre Gray to move within a point of third-placed rival Tottenham. 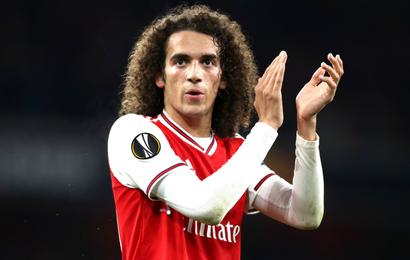