United captain Maguire thought he had headed United into a first-half lead against Burnley only for referee Kevin Friend to controversially adjudge he had fouled Erik Pieters in the process.

VAR backed that decision and for a while it looked like United would be frustrated in its bid for victory.

But Pogba connected sweetly with a Marcus Rashford cross 19 minutes from time and his volley beat home goalkeeper Nick Pope with the aid of a deflection off Matthew Lowton.

It gave United a 1-0 win that moves it three points clear of Premier League champion Liverpool ahead of the massive clash between the two teams at Anfield on Monday (AEDT).

"It was a goal for sure - I don't know what happened," Pogba said about the Maguire disallowed header, which came shortly after VAR had intervened to rescind a Robbie Brady foul, instead penalising Luke Shaw.

"It was a beautiful goal and the referee decided that it was not. It was a strange decision, but we got the result we wanted so we are happy.

"Obviously it is hard but you have to be professional and we know it wasn't going to be easy with the decision of the referee which I didn't agree with.

"But I'm not the boss on the pitch so we just have to keep calm and keep focused and of course we scored and won the game."

United is top at this stage of the season for the first time since Alex Ferguson's last season in charge, when it went on to win the title.

But after just 17 top-flight games, Pogba reminded his team-mates there is so much work still to do.

"You can see that the game was going both ways, it is very hard to play here," he said. "They have a style of play, very strong and we knew it would be difficult.

"We had to keep our heads calm and just focus on ourselves and hope the goal would come and it did come. It was a great performance from everyone, good focus.

"Always happy when I win - we won and I'm happy we played well. Still a long way to go and we have big games to go so we have to focus on that.

"We got the three points and we're happy for that but there's still a long way and now we focus again until the end of the season."

Solskjaer relived Man Utd board stuck by him 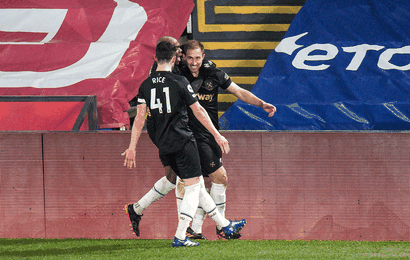