Ramos joined PSG on a free transfer from Real Madrid in pre-season, having spent 16 years at Los Blancos.

The experienced centre-back was part of something of a squad revolution at PSG, with Lionel Messi, Gianluigi Donnarumma, Georginio Wijnaldum and Achraf Hakimi also moving to the French capital.

But Ramos is yet to make his PSG debut after suffering a calf injury at the end of July, having also missed large chunks of 2020-2021 because of fitness issues, including a previous calf problem.

PSG has been cautious about reintroducing Ramos to training, eager to avoid aggravating the injury, but it appears he is finally close to making his debut.

"Sergio Ramos's recovery programme, coordinated by the medical staff, is evolving as planned," a medical update on PSG's website read.

"He is expected to be able to begin training with the rest of the squad next week."

But Verratti is set for a spell on the sidelines with a hip injury, which the club believe could take a month to recover from.

As such, the Italy international will likely miss PSG's next five matches across all competitions, potentially including two upcoming UEFA Champions League clashes with RB Leipzig and Manchester City.

"After suffering a knock in the last game, Marco Verratti has a deep lesion in the oblique muscles of his left hip. He is expected to be out for four weeks, depending on how the injury evolves," the update added.

PSG also revealed Kylian Mbappe is a doubt for Saturday's (AEDT) visit of reigning Ligue 1 champion Lille because of illness. He will be evaluated over the coming days.

Next Mbappe ruled out, Messi in doubt for Lille clash
Read 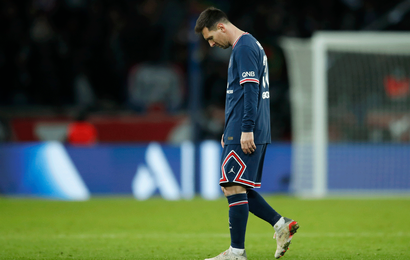