Diego Simeone's side failed to register a shot on target in its 0-0 draw with Villarreal before the international break, which followed a similarly dismal performance in a goalless meeting with Huesca.

Suarez settled any nerves early on at the Balaidos, though, scoring his third Atleti goal in the sixth minute to become the second fastest player to reach a 150 in LaLiga in the 21st century after Cristiano Ronaldo.

Atleti confirmed a 200th LaLiga win under Simeone late on when Carrasco headed home after Joao Felix's effort  crashed back off the crossbar.

The visitors started with a spring in their step and Suarez's shot from 12 yards squirmed underneath Ivan Villar after the Uruguayan was picked out by Manuel Sanchez after a slick move down the left.

The hosts carved out two clear opportunities to level midway through the first half. Sergio Carreira crashed an effort against the upright after stealing in unmarked at the back post, before a clean-through Santi Mina was denied by Jan Oblak's outstretched foot.

Thomas Lemar saw his corner bounce back off the crossbar with Villar flailing, but another goal for Atleti before the break would have been harsh on Celta, which ended the first half with 10 attempts on goal to the visitors' three.

Suarez was denied a second immediately after the restart as Villar diverted his close-range effort from Diego Costa's pass over the crossbar.

Atleti looked far more robust at the back in the second half, limiting Celta to a series of half-chances, while at the other end Villar got down well to push substitute Marcos Llorente's low strike past the post with 15 minutes remaining.

The visitors' jump to fourth in the table was sealed in the fifth minute of stoppage-time when substitute Carrasco headed past Villar after sublime skill from Joao Felix had resulted in his powerful strike rebounding off the crossbar and into his path. 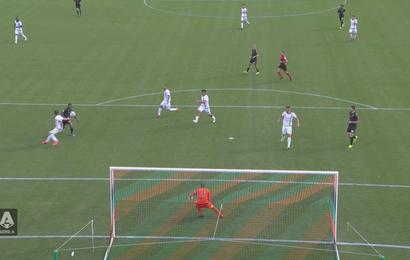