Manchester City star Sterling has been dropped for EURO 2020 qualifier against Montenegro after a reported coming together with Liverpool defender Gomez at England's St George's Park training base.

The pair clashed on the field during Liverpool's 3-1 win over City at Anfield and Sterling conceded his emotions "got the better" of him as he explained the incident that took place the following day.

England boss Gareth Southgate was keen to defuse the situation when he faced the media on Tuesday and Hudson-Odoi has also leapt to the defence of Sterling, who has earned praise in the past for his stance on wider issues such as racism.

"Raheem's a very nice guy, very encouraging, very positive about everything he does," Chelsea teenager Hudson-Odoi said, according to several British newspapers.

"When I first came in, I didn't expect him to be so nice. Of course he is a nice person but when you see somebody always welcoming you, just talking to you, giving you advice on how he plays and just being around you a lot it makes you feel so welcome in the team.

"He's a big leader in the team because he's a very top player, he's in club and country playing every game, working really hard, scoring a lot of goals, so someone like that to have a say on racism it is a big feeling for all of us. He is sticking up for everyone who is involved in the game. It is a great feeling to know he's going to do that."

Sterling will play no part against Montenegro at Wembley but is in Southgate's plans for the trip to Kosovo three days later.

He took part in training alongside Gomez on Tuesday and Hudson-Odoi is confident the matter has been dealt with.

"What's happened, happened," he said. "It is a situation where we have dealt with it as a team.

"We have moved on it. We have had a little talk with each other, and made sure everything is OK. We just want to move on as a team and focus on the game on Thursday."

England require a point from their games with Montenegro and Kosovo to secure a place at Euro 2020.

Next Maguire stars as Rep Ireland topples All Whites
Read 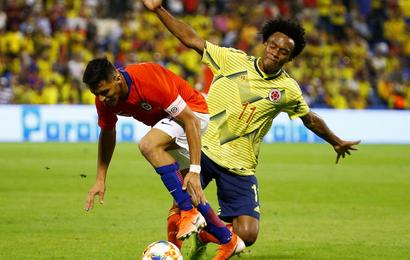