With questions lingering over Coleman's Wales future after their failure to qualify for the World Cup, Tom Lawrence's stunning solo effort 15 minutes from time looked set to ensure the manager's milestone fixture would be a memorable one.

However, an earlier penalty miss from Sam Vokes would ultimately prove costly for the host, as Panama - which is preparing to take part in a World Cup for the first time in its history - pulled level in the 93rd minute.

Shorn of a glut of key players including Gareth Bale and Aaron Ramsey, Coleman utilised Tuesday's friendly to offer experience for a number of Wales' promising youngsters, with Lawrence, David Brooks and Ben Woodburn impressive during a lively opening.

The host was granted an opportunity to go ahead in the 42nd minute when Luis Ovalle scythed down David Edwards in the penalty area, but Vokes could not apply the finish from 12 yards.

Lawrence took matters into his own hands in fantastic fashion, but Cooper was on hand to steal the show in the final moments, marking what could be Coleman's final game at the helm in a disappointing draw.

Sheffield United youngster Brooks got his full Wales debut off to an impressive start, floating in a sublime cross to Woodburn, whose header failed to beat Jaime Penedo.

Brooks, Woodburn and Lawrence continued to shine, with the latter almost getting in on goal after weaving his way through Panama's backline, only for a heavy touch to see the chance go begging.

Wales had a glorious chance three minutes prior to the interval, though. Brooks played in Edwards, who drew a clumsy foul from Ovalle inside the box.

It was not to be, however, as Penedo got down low to his right to keep out Vokes' tame spot-kick.

That miss was to be the Burnley striker's last contribution as he made way for Barnsley forward Tom Bradshaw at half-time, but it was Panama who should have been ahead shortly after the restart.

Gabriel Torres beat the offside trap to get in on goal, but Danny Ward was out swiftly to smother the Panama forward, with Chris Gunter recovering to block the follow-up.

After James Chester headed wide from a corner, Coleman's side finally found its opener on 75 minutes - Lawrence leaving Panama's defence in his wake before curling a precise finish into the bottom-right corner.

Penedo had to be at his best to keep out Andrew Crofts' blistering attempt as the game drew to a close, and that save would prove vital as Panama found an opening at the other end.

Wales' defence switched off, allowing Cooper to drift inside and latch onto a neat throughball from substitute Ismael Diaz, and the winger kept his cool as a historic year for Panama finished in a positive fashion. 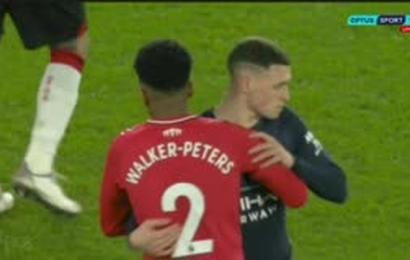