The collection of squads named for UEFA EURO 2016 has featured more shocks than a Game of Thrones episode, with enough world class talent left out to fill two teams capable of contesting the tournament.

From Spanish stars Diego Costa, Fernando Torres, Juan Mata and Hector Bellerin to controversial French pair Karim Benzema and Mathieu Valbuena, it is a 'who's who' of elite players that have been left on the cutting room floor for a variety of reasons.

Regardless of whether it was a falling out with the manager - as was the case with Croatian defender Dejan Lovren - or a murky extortion case - like that which embroiled Valbuena and Benzema - or simply a matter of being overlooked on form, the players left behind make a very handy squad.

In fact, we’ve been able to assemble a ‘Rejects XI’ we think is capable of winning the tournament, or at least going close.

That we could find no room for rejuvenated Atletico Madrid striker Torres, snubbed England engine Theo Walcott or dogged French strikers Alexandre Lacazette and Kevin Gameiro is a testament to the large number of world class players who’ll be joining fans around the world in watching the action from their living room. 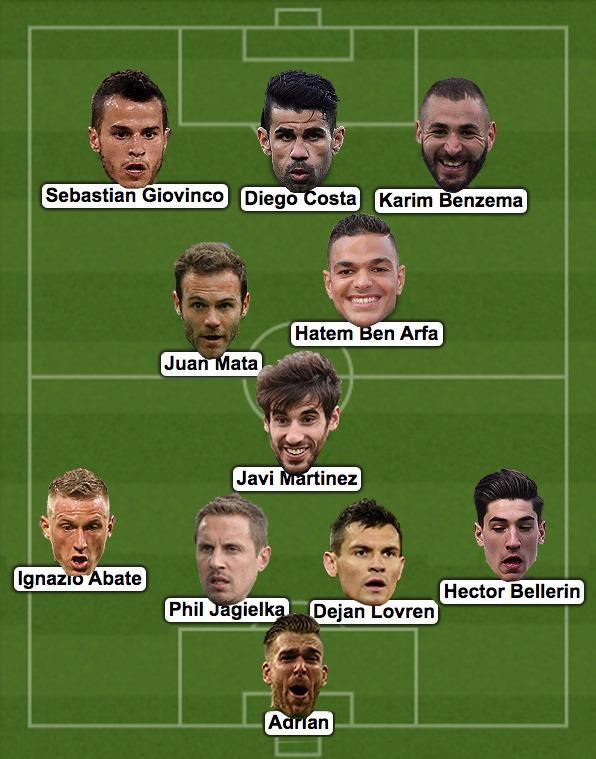 Lining up in a 4-3-3, with one holding midfielder, our team boasts accomplished marksmen in Karim Benzema, Diego Costa and Sebastian Giovinco up front. That trio is ably supported by the ‘flair’ of attacking midfielder Hatem Ben Arfa - apparently sought-after by 18 clubs but not deemed good enough for the host nation. The stylish Juan Mata slots into a central play-making role.

Bayern Munich tackling machine Javi Martinez provides cover for the defence – possibly the one weak area of our line-up - with Phil Jagielka and Dejan Lovren in the centre, Arsenal's Bellerin on the right and versatile Ignazio Abate playing on the left.