Eduardo Vargas opened the scoring in Cuiaba, but an Arturo Vidal own goal ensured it ended honours even, a result that means Chile can no longer finish bottom of Group A.

It also helped Uruguay get off the mark after defeat to Argentina in its opener, though Oscar Tabarez's side still has work to do reach the quarter-finals.

A lively start to proceedings saw Edinson Cavani force an outstanding save from Claudio Bravo with a close-range header, only for the Chilean goalkeeper to be denied the glory by a late offside flag.

The officials also waved away Chile claims for a penalty moments later for the same reason, though Martin Lasarte's side would not be denied for long.

Vargas looked to still have plenty to do after a slick one-two with Ben Brereton had taken him into the box, but he produced a brilliant finish from a tight angle to put his team ahead.

Although Chile subsequently lost defender Guillermo Maripan to injury, Uruguay struggled to create anything of note before the half-time break.

The second period started in a similar fashion, but Chile's hopes were dealt a further blow when Vargas limped off with an apparent hamstring issue.

Aided by a flurry of substitutes, Uruguay began to build pressure, and that told with just over 20 minutes remaining, Vidal adjudged to have got the final touch under pressure as Luis Suarez looked to turn in a Matias Vecino flick-on from a corner.

Boosted by their equaliser, Tabarez's men dominated much of the closing stages, though they were denied a first win of the tournament as an obstinate Chile defence stood firm. 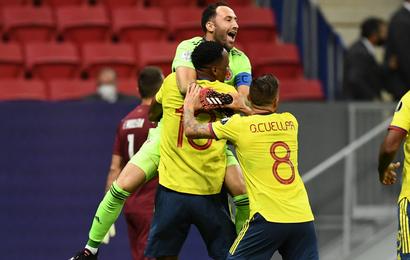