The German Football League (DFL) issued the fine after footage emerged of Dortmund players celebrating Sunday (AEDT) on the team bus without masks and without observing social distancing rules.

The club quickly accepted the fine having issued an apology on Sunday as Germany has been in lockdown since November amid the coronavirus pandemic.

The DFL took a dim view of the incident after around 200 fans were also allowed to gather outside the club's training ground to greet the team bus arriving in Dortmund after Saturday's 4-0 away win.

"There is no question that the derby is a special game. Nevertheless, the club has the responsibility to control and monitor compliance with the rules," the DFL said in a statement.

"All matches must be held in compliance with the currently valid medical-hygienic concept, including the arrival and departure" of teams.

Dortmund said it would consult with police and the relevant authorities to stop similar scenes happening in future. 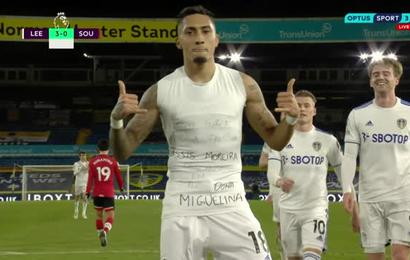