The Chiefs could have been pipped at the summit by Saracens, but their surprising defeat at Worcester Warriors in the last round of regular-season fixtures rendered Exeter's result immaterial.

But an impressive campaign continued at a pace for the Chiefs in a 40-21 defeat of the Saints, which they will now host again in the play-off semi-finals at Sandy Park.

It was 21-21 at the end of a frenetic six-try first half that saw Cobus Reinach touch down with a 95-metre effort shortly before the whistle despite Courtney Lawes and Alex Waller being in the sin bin.

Quins agonisingly missed out on fourth due to a 27-25 loss at the Ricoh Arena, with Saints' one extra win proving crucial as the teams each finished on 56 points.

A Joe Simpson double had seemingly put Wasps out of sight in the second half but Danny Care's score and five points from James Lang's boot brought Quins back into it.

Lang had the chance to steal it with a last-gasp long-range penalty, only for his strike to fall short.

Much-changed European champions Sarries were beaten 31-29 at the Warriors, who were grateful to Josh Adams' score and Duncan Weir's penalty with the clock winding down, while relegated Newcastle Falcons went down with a whimper in a 19-12 loss at home to Bristol.

Jacques van Rooyen's close-range try and Rhys Priestland's extras meant Bath edged out Sale Sharks, despite an impressive 46-41 win over Gloucester in a match that had 13 tries. 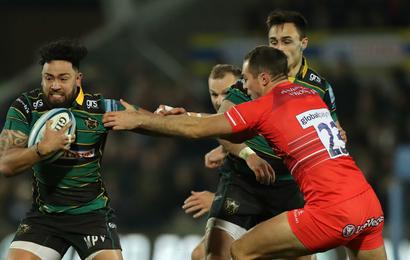