MISSED the match? Catch up via beIN SPORTS CONNECT

The result helped group winner Egypt to move on from the headlines regarding Amr Warda, who will return to contention for a place in Javier Aguirre's team after the Egyptian Football Association overturned the decision to expel him from the squad for alleged sexual harassment.

DR Congo's win over Zimbabwe means second-placed Uganda progress to the knockout stages of this competition for the first time in 41 years, having last done so in 1978 when they were the eventual runners-up.

Farouk Miya fired a pair of early shots for Uganda, twice testing Mohamed El-Shenawy from tight angles, and Allan Kyambadde went close as Sebastien Desabre's men made a lively start that belied their billing as underdogs in Cairo.

But Uganda's good work was undone by Salah's curling 25-yard free-kick that dipped over the wall and beat Denis Onyango, despite the goalkeeper getting a hand to it.

Uganda's task was made doubly hard when Ayman Ashraf's cross from the left evaded Salah but found El Mohamady, who scored with an angled drive.

Salah should have made it three early in the second half when he went one-on-one with Onyango but the keeper clawed his chipped shot away from danger and Miya blazed over the crossbar from 12 yards soon afterwards.

Onyango was stretchered off with 20 minutes left after suffering an injury that Desabre will hope clears up in time for the round of 16, and Emmanuel Okwi missed a chance to grab a late consolation for the Cranes, trickling a shot wide after racing into the box as Egypt maintained their perfect defensive record. 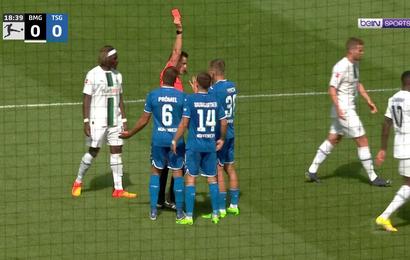